Artesanos Naturales, (the natural artists) are a group of mask carvers and fiber artists

of the indigenous tribe Boruca, one of 8 indigenous groups, they live on their own

Boruca's history has not been an easy one. Farming alone was not enough to sustain

their tribe and people were experiencing extreme poverty. They were losing their pride

quickly in their decaying culture. With the completion of the Inter-American

60's, tourism began to trickle in with renewed interest in the annual

'Fiesta de los Diablitos' or 'Festival of the Devils'. Also the Peace Corps workers helped as they brought the Borucans some new designs and marketable ideas. This is when their

Daily life in Boruca now has changed to a focus on cultural preservation. Today eighty

percent of the Borucans are artisans and nearly all either are carvers or weavers. During the months of less tourism, it is a struggle to provide the things they need and that they cannot grow, such as the necessary school uniforms, books, fees,

Life for these indigenous artists is extremely challenging as they live on a reserve high in the Talamanca Mountains, in the Southern Pacific area.

This is a very remote region, difficult to reach, especially in the rainy season (September to December). In addition, not many of the Borucans have cars. Therefore, it is a hardship for them to get out and sell their goods. Several of the artists got together to figure out how they could reach a larger market. As a result, they formed as a group and called themselves 'Artesanos Naturales de Boruca' naming Marina Lazaro as their leader. Marina gathers the goods of several of the artists and carpools with the school director or a few others and travels around to the various souvenir stores, hotel gift shops and art galleries in order to market their exquisitely crafted products.

***EXCITING NEWS, THE GALLERY GIFT SHOP IS NOW OPEN AND OFFERING A NEW COLLECTION OF CARVED AND WOVEN PRODUCTS. THE VILLAGE IS NOW OPENED TO VISITORS***

Boruca Gallery Gift Shop is located at Pacific Edge Eco Lodge in Dominicalito, just south of Playa Dominical, created by Susan Atkinson 24 years ago, and now under new ownership with Michaelynn and Sid Vandiver. The Gallery has a wide collection of only the best detailed carved masks/wall hangings as well as hand-woven, naturally dyed 100% cotton products such as placemats, table runners, tote bags and yoga mat carriers. Our Gallery works closely with the village, being one of the largest buyers, since 2015 we have bought and sold 1700 masks and nearly 1200 woven products at a fair trade price. This means that not only do the Borucans get paid a good price directly; the buyer also does not get charged a huge mark-up. The Gallery wants as many sales as possible to keep the money flow going into the Borucan village as 80% of their income comes from their handcrafted products. Our stock is changing constantly; there are always new products available. At any one time, there are 25 - 40 unique masks ranging in price from $15 to $175 along with all the woven goods. Please stop by The Gallery to learn about our indigenous folklore artwork!

Meet 2 of the new owners of the Gallery Gift Shop, Michaelynn and Kaiya Vandiver who went to Boruca the first time this May 2021, having their first of many shopping trips.  Pictured here also is Marina our main Borucan sister who has just  shown them the many natural dyes she uses and the previous  gift shop owner Susie Atkinson. 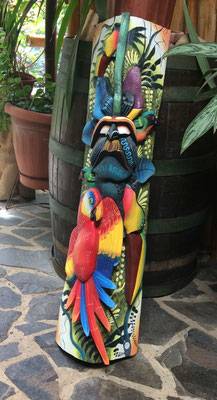 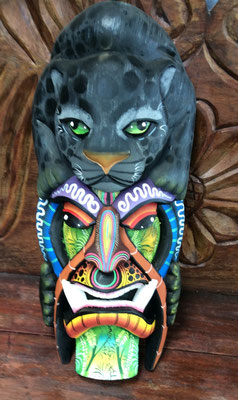 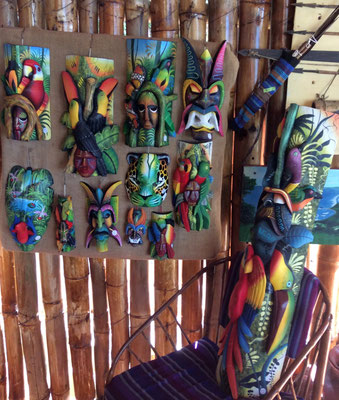 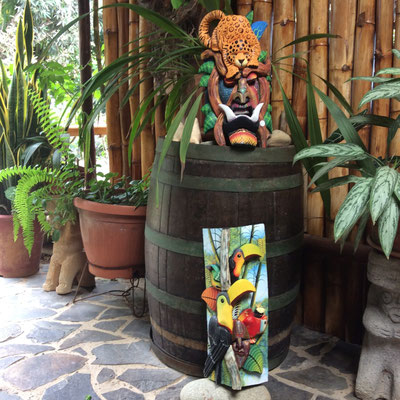