HOW THE BORUCANS DEFEATED THE SPANISH CONQUISTADORS....

The history and traditions of Borucan masks began over 500 years ago, during  the Spanish Conquest. 'Diablito' masks, or little devil masks were  created and worn with the intent to scare the unwelcome invaders back to Spain. The conquistadors called the indigenous Borucans devils because they observed uncircumsized natives with faces of forbidding devilish images  and other animal figures, therefore assumed that they worshipped the devil. The Borucan people feel a great sense of pride knowing that they were triumphant in keeping the Spanish from conquering their land and their spirit. Every year the annual 'Fiesta de los Diablitos' or 'festival of the devils', always December 30 to January 2, has traditionally occurred since the Spanish crusade of 1490-1500. The highlight of the festival is the 'Danza del los Diablitos' or 'the dance of the little devils', which is performed in remembrance of the Borucans' fierce resistance to colonization. The truer name of the festival should be the 'Festival of the Ancestral Spirits'. When the Spaniards arrived with advanced weapons, the Borucans only had animal spirits, such as the jaguar, to guide them. In homage to the spirits that aided them, today's intricate masks are carved and painted to represent these spirits, fierce animals, devils, and also images of the local flora and fauna of their country. The Borucans have become over the years very detailed relief carvers. Relief carvings have a flat back and the image carved in three dimension, obtaining unbelievable depths, all from one piece of wood. There are three distinct styles and each tells a specific story about Borucan culture. The first is the 'diablito' or 'devil' mask, the most traditional. The second is the 'ecologica', featuring animals and plants of the rainforest. These were originated by a new generation of artists concerned about the imminent threat of their culture due to the destruction of their environment. The third, 'combinados', are the metamorphosis of both the 'diablitos' and the 'ecologica', as they represent the blending of the traditional and contemporary styles.

The masks start out with a log of either balsa wood or cedar. After removing any bark, the log is cut a bit longer than the final length of the completed mask. This log is then cut vertically to produce two half round pieces, and the interior is hollowed out with a chisel and mallet. Next, the rounded front of the mask is hand sanded to a smooth surface and the design is sketched onto the wood. The artists now begin to remove the negative background area, slowly creating a high relief three dimensional face. For the fine details, exacto-type knives are used to whittle away the unwanted wood. Cedar is very hard and difficult to carve; therefore the masks made from this type of wood are not quite as detailed. Conversely, balsa wood is very soft, and these are the masks where the artists can really achieve the many nuances of facial expression. The majority of masks are all of one primary piece of wood, the only glued-on additions are for the very small birds and their beaks, which are constructed with small pieces of inserted wood.

Their elder, Ismael Gonzalez, is the only living person to ever have been declared a 'cultural patron of the country'. In the early 70s, he revived mask carving, as it was a dying art with only a few community members still carving masks for the festival of

'Los Diablitos'. Don (an esteemed title similar to 'sir) Ismael taught many people, some as young as thirteen, to carve in the traditional way, using both cedar and balsa wood. They would all sit around him, while he straddled his hammock like a horse, as he carved away. There were several visiting observers, such as Peace Corps workers, who brought them paints and taught them to do detailed painting. Today in the school at Boruca, the children are taught carving in the fifth grade. The Borucans craft their commercial masks in an effort to improve their economic situation, define their identity, and keep their native traditions alive.

***See the next tab "Danza de Diablitos" for more information of the traditional festival reenacting the victory over the Spanish Conquistadors. 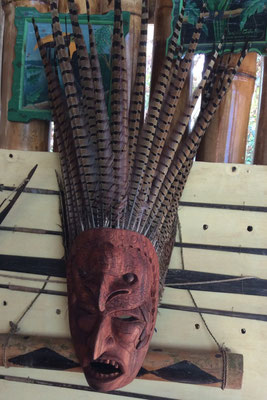 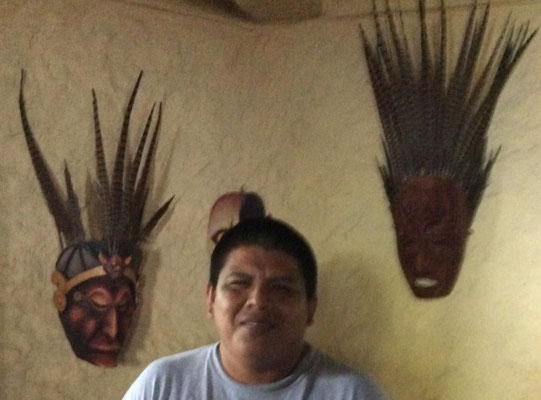 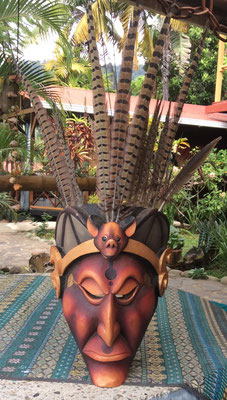 One of our favorite carvers, Jose Gonzalez Lazaro