Most marine snails of the families Muricidae and Thaididae, which make up the genera Murex, Thais, and Plicopurpura, produce in the hypobranchial gland (mucus gland) a viscous liquid secretion. The secretion contains, besides mucus and biologically active compounds, minute amounts of chromogens, which develop enzymatically and under the influence of light and oxygen into a purple pigment known as "Tyrian purple," "Royal purple", or "Shellfish purple", Throughout history, humans have used the pigment for various purposes.In ancient times only worn by the noblest Romans and called by the name of Tyrian purple. In the 4 century BC, historian Theopompus reported that purple for dyes fetched its weight in silver. The production of shellfish purple was tightly controlled in Byzantium and subsidized by imperial court, which restricted its use to only the particularly elite members of the imperial family.On the Pacific Coast of Mexico and Central America for at least 500 years, the dyeing properties of the "snail's ink" have been known and the pigments used for ceremonial and funeral garments. Here, the muricid Plicopurpura pansa is the most exploited and rarely the thaid Thais kiosquiformis. Thais kiosquiformis has to be killed to obtain a few drops of the secretion from the hypobranchial gland, in contrast to P. pansa, which can be "milked" periodically without harming the animal to obtain a few milliliters of mucus containing the "Tyrian purple" precursors.

In contrast to the Mediterranean region, where the use of purple from marine snails has long been forgotten and the craft of dyeing today cannot exactly be reconstructed, in remote Pacific regions of Mexico (in the states of Oaxaca and Michoacan) and in the Indian community of the Borucas in Costa Rica, its use continues until the present day on a small scale and represents the survival of a knowledge of considerable antiquity. However, it is feared that this old tradition will be lost in the near future.The scarcity of the snails, the time, patience, and labor required for collecting them and the great numbers of snails required to dye a small piece of material, make the products produced from the dyed yarns even more valuable.At low tides the mollusk is relatively easily gathered, and it ejects its dye-producing liquid in such a quantity that there is no need to kill the animal to obtain the purple. Furthermore, the dye-producing hypobranchial gland is so active that the snails can be "milked" periodically. The secretion is a milky-white liquid. which turns on exposure to air and light, at first yellow, then greenishblues, and finally purple -Tyrian purple. The shells are then laid again on the stones from which they were taken to recover, and after some time they give a fresh quantity of juice, but not so much as the first time. If the operation is repeated three or four times, the quantity is very small and the animal dies of exhaustion.” 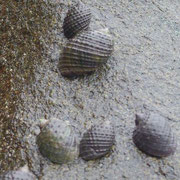 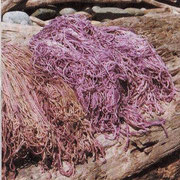 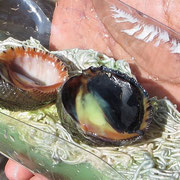 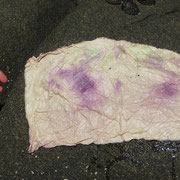