ONLY NATURAL DYES ARE USED BY ARTESANOS NATURALES DE BORUCA.....

Natural dyes are colorants derived from plants, invertebrates orminerals. The majority of natural dyes are vegetable dyes from plant sources –roots, berries, barks, leaves, wood and other organic sources such as fungi and lichens. The essential process of dyeing has changed little over time. Typically, the dye material is put in a pot of water and then the yarns to be dyed are added to the pot, which is heated and stirred until the color is transferred. Many natural dyes require the use of mordants to bind the dye to the textile fibers; salt or vinegar is used by Artesanos Naturales de Boruca.From the second millennium BC to the 19th century, a succession of rare and expensive natural dyestuffs, known as 'luxury dyes' came in and out of fashion in the ancient world and then in Europe. In many cases the cost of these dyes far exceeded the cost of the wools, silks and cottons they colored. Often only the finest grades of fabrics were considered worthy of the best dyes. The luxury dye still used today by the Borucans is the Tyrian purple from the excretion of the murex sea snail. See Tyrian purple tab to learn about this amazing process.Artesanos Naturales de Boruca use a variety of plant species and bark as well as murex: 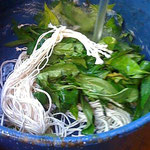 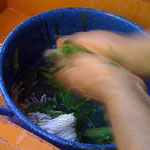 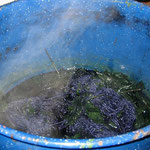 NAVY BLUE - Sacatinta (Jacobina spicigera) releases a navy blue dye when boiled in water for several days.TURQUOISE - Sacatinta leaves also release a greenish blue dye when burned in fire, then placed in cold water and lastly rubbed together.DENIM BLUE - Azul de mata (Justicia tinctoria) leaves are another source for blue, similar to indigo. [See 3 photo's above].RED - Teak (Tectona grandis) produces a red dye when the leaves are wet and then rubbed together.YELLOW - The rhizomes of the Tumeric plant (Curcuma longa) is smashed and rubbed together to form ayellow dye, which can become fixed and more vibrant with the addition of lime. [See 2 left photo's below].

RUST BROWN - The bark of the Nance tree (Byrsonima crassifolia) is soaked in water to release a dark reddish-brown dye. [See large photo top of page].

PURPLE - Tuyska” (in the Borucan language) its scientific name is unknown. The Tuyska leaves are boiled for several days.

LILAC - Murex (Purpura patula) is an excretion that is milked from the sea snails, drop by drop. The sun turns it from white to lilac/purple. The use of this method is what makes the Borucans unique!! They are the only people left in the world to use murex and not kill the sea snails.[ See the tab 'tyrian purple'].

BLACK - Charcoal (carbon and ash) is mixed with mud, or river sediment.GREEN - Gavilana (Neurolaena Lobata) the leaves are boiled for several days to get a green color.

YELLOW/ORANGE - Mango (Mangifera Indiva) provides a yellow/orange color by smashing the fruit and mixing the yarns with the pulp.

GRAY/BROWN - Calabaza (Cucurbita) is used by smashing the pulp and boiling with the yarn.

BROWN - Amarillion (Prunus Cornifolia) is used by soaking the bark of the tree for several days, and then boiling.